Khaled Daouk was only 29 when he suffered the loss of his young wife, Raya. “She was beautiful, intelligent, sweet, and caring,” he said of the mother of his two older sons, who passed away nearly five decades ago.

Despite the time that has gone by, Daouk was visibly emotional as he shared his memories with 80 plus Daouk family and friends, as well as LAU leaders who gathered at a recent dedication ceremony of the Raya & Khaled Daouk Lounge, a student space named in honor of Raya and the family’s generosity to the university.

“Raya was like a butterfly – she came, landed, built her small nest by having two babies and flew away forever,” explained Daouk.

They met in 1957, married in 1968, and spent three blissful years together before Raya passed away, leaving behind one-year-old Youssef and one-month-old Said.

Yet, in that short span of time, she managed to leave a mark on everyone she met, living her life to the fullest both in Beirut and Paris as the daughter of former Prime Minister and first Lebanese Ambassador to France Ahmad Daouk.

“Raya is well engraved in our minds, and her memory will never part from our thoughts,” said Daouk.

Today, her legacy lives on through her two sons, Youssef and Said, both of whom were present at the ceremony, as well as her four grandchildren, including a friendly and rambunctious young girl, Raya, her late grandmother’s namesake.

“It was such a heartwarming event bringing together so many family members of all ages – even several grandchildren – to remember someone who passed away too soon,” said LAU Associate Director of Development Paula El-Haddad, who helped organize the dedication ceremony.

At LAU, her legacy lives on through the Raya & Khaled Daouk Lounge, a student space on the fifth floor of the Wadad Sabbagh Khoury Student Center located on LAU Beirut campus. However, the named space honored not only Raya, but also the Daouk family’s generosity to LAU that dates back nearly a decade when the university expanded its Beirut campus by purchasing land from them at a substantial discount.

“LAU and my family have been both neighbors and partners for a very long time – since the 1890s,” explained Daouk, who said he and his family were glad that the land now belonged to LAU which, he believed, “will continue to serve our community for a long time.”

The Daouks, who have a long history in the Ras Beirut area near LAU campus, are a prominent Beirut family who have made significant contributions to the community through politics, diplomacy, business, and charitable giving.

“This event constitutes a major ray of hope, a ray of optimism, and we are so absolutely delighted at LAU to have you all gathered here to celebrate the gift of giving, which is so precious to us all,” said LAU President Joseph G. Jabbra, during his speech at the ceremony.

LAU offers a number of naming opportunities that provide a special way for friends, alumni, and supporters to leave a lasting mark on the university. For more information about giving toward the institution, please visit the Giving website. 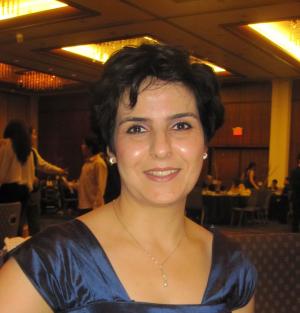