LAU’s response to the deteriorating economic crisis in Lebanon for the past three years has been a relentless fight to safeguard education and healthcare in the country. Several fundraising campaigns to bolster financial aid to students and assist patients at its medical centers have been successful thanks to the generous donations of alumni and friends of LAU, and the support of its Board of Trustees (BOT).

Given the dire situation in the country, this past May, LAU President E. Mawad and Vice President for University Advancement George Najjar embarked on a whirlwind tour of the United States to reassert the university’s commitment to its mission, and address the need for more student scholarships, as well as funding for its medical centers.

The university's Board of Trustees wholeheartedly endorsed this two-pronged appeal, and in all three cities they visited, Dr. Mawad and Dr. Najjar were warmly received and hosted by alumni.

“Everywhere we went,” said Dr. Mawad, “our alumni asked how they could help, what they could do. It was heartwarming to see their unwavering support of the university and their willingness to give back.”

Before he was joined by Dr. Najjar, Dr. Mawad held a series of high-level meetings in Washington DC with key individuals in US government circles to thank them for the critical help they extended to Lebanon, particularly LAU. These included the Director of USAID’s American Schools and Hospitals Abroad (ASHA) Gordon Weynand, the senior policy advisor to Senator Jeff Merky, Senator Bob Menendez (Chief of the US Senate Foreign Relations Committee), Senator Chris Van Hollan, USAID Acting Assistant Administrator Andy Plitt, and the policy advisor to Senator Jean Chahine.

Rounding off his DC visit, Dr. Mawad attended a May 1 alumni reception graciously hosted by alumna Chantal Farah, which was an opportunity for many alumni and friends of LAU to meet the president in person.

Plans had also been underway to revive a major fundraising event, the annual LAU Gala – put on hold during the pandemic – exceptionally this year with the active involvement of trustees.

The “Give to Learn, Give to Live” Gala dinner, to be held on September 9, will be accompanied by an art exhibition at LAU NY (September 6–19) and an online auction (September 7–12), both titled “Art to Learn, Art to Live.” All proceeds will go toward student financial aid and cancer treatment.

In view of the situation in Lebanon, the committee emphasized the importance of fundraising in North and South America that have sizable Lebanese communities. While in the Big Apple, Dr. Mawad also sat down with technology leaders, mostly of Lebanese origin, to solicit support for LAU’s Industrial Hub venture, and to help to transform LAU New York into a fully functioning campus in its own right.

In Texas, the third and final leg of the trip, LAU alumni went above and beyond to welcome Dr. Mawad and demonstrate their dedication to their alma mater. A reception and dinner hosted in his honor by President of the LAU Houston Alumni Chapter Tania Chahine Taysoun and her husband Wissam, was followed the next day by a major event held by trustee Nijad Fares and his wife, Zeina, attended by160 guests, many of whom were alumni.

At both functions, Dr. Mawad spoke about the financial hardships of both students and patients in Lebanon, reminding the alumni that last year the university had allocated $100 million from its endowment exclusively for student financial aid. Hence, the importance of LAU’s new initiatives to generate income such as the Industrial Hub and exploratory efforts currently underway to establish a presence for LAU in Saudi Arabia and Iraq, he said.

LAU, he assured them, will overcome the crisis, and is relying on the continued and increased support of Lebanese living and working abroad to help it “institute bold new initiatives. especially in meeting mounting medical bills.”

Fares highlighted LAU’s many recent achievements, under adverse conditions, praising Dr. Mawad’s leadership. And although the event was not meant to be a fundraiser, an amount of close to $50,000 was raised, proving once again the critical role of alumni as LAU ambassadors.

As President Mawad and Dr. Najjar both emphasized, each and every proud LAU graduate is an ambassador for the university. Their support is needed now more than ever. With the help of generous alumni and the university’s strategic vision for expansion, the sky’s the limit. Lebanon’s recovery will depend in part on the assistance – financial and otherwise –that generous LAU alumni are ready to make to help their home country. 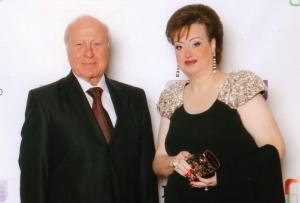