Students from Douma now have access to more scholarship support thanks to the Hanna and Nina Ayoub Foundation’s recent contribution of $10,000 to establish five scholarships designated towards students from the north Lebanon village. A gift signing ceremony took place at Hanna and Nina Ayoub’s residence in Yarze in fall 2018, and was attended by President Joseph G. Jabbra and Director of Development Lana Abou Teen, who facilitated the donation to the university.

Hanna and Nina, along with their niece, ZeenaLee Ayoub, proudly took part in the signing ceremony, which was followed with a discussion about LAU’s achievements and the foundation’s aim to potentially support even more students from Douma. While it is the first time the foundation has made a contribution to LAU, Ayoub has a long history of giving towards the institution, through personal donations as well as gifts from his company, Al Hamra Kuwait Company, dating back to 1986 and totaling more than $285,000. These donations have been earmarked towards a construction fund to name a 210-square meter space on the Byblos campus, which is expected to be officially inaugurated in 2019. In addition to his giving to LAU, Ayoub served as a board member of the university. 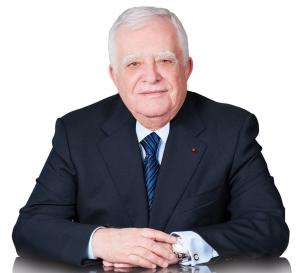