The first event was an alumni reception at the Lebanese embassy on November 3.

In moving remarks, Dr. Mawad related the challenges LAU has been facing and surmounting, and underscored the institution’s determination to prevail. He cited recent achievements as evidence of this spirit, notably the university’s rising position in international rankings (now in the 501–600 band worldwide and #1 in business and economics in Lebanon according to Times Higher Education), and its efforts to provide the country’s most generous financial aid packages, among other points of pride.

In thanking the attendees for their presence and support, Dr. Mawad remarked upon the intrinsic links between the university and its alumni around the world. He urged the graduates to remain engaged as the university’s best advocates.

Affirming the case for support, Lebanese Ambassador Rami Mortada, who had opened the event, spoke about the crucial contribution of the higher education sector to Lebanon’s recovery.

The next evening, during a fundraising dinner for about 50 donors and community leaders based in London, Dr. Mawad underscored the importance of alternative revenue sources for higher education institutions, and explained the great lengths LAU has gone to support students and patients while maintaining high academic and healthcare standards across its campuses and medical centers.

Among those present was former UK ambassador to Lebanon James Watt, and all participants had an opportunity to ask questions about Lebanon’s situation and LAU’s present status and plans.

They also learned about the Centre for Lebanese Studies at LAU, a research powerhouse and policy influencer led by Dr. Maha Shuayb, who gave a brief about the center and highlighted its efforts to support scholars and universities in Lebanon amid the ongoing crisis.

President Mawad said in his address that “LAU’s commitment to excellence in higher education and healthcare is matched only by its deep roots in Lebanon and dedication to serving its community. Whatever we do and wherever we go is intended to strengthen our presence in Lebanon.”

Both events were graced by the presence of Dr. Janine Mawad and Board of Trustees Chair Philip Stoltzfus.

Beyond the above-mentioned events, the team held in-person meetings with respected business and community leaders including Michel Fares, Nadhmi Auchi, and several others.

The team has returned to Lebanon but will soon be departing again, this time for a four-day visit to Bahrain coming up on November 24. 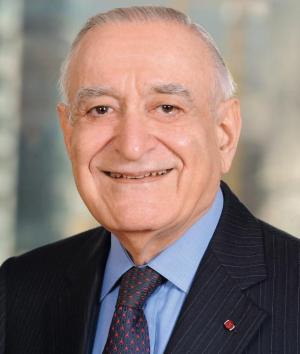